Catches at this relatively early stage of the winter practically invariably involve catching on the foreshore, as the geese have yet to finish the feed available there. Diminishing stocks on the mud-flats gradually force the geese to seek food elsewhere, and later season catches tend to be land-based.
Inter-tidal catching can be more problematic than land-based. There is the additional factor of the tide to contend with, and the pattern of foreshore usage can be more transitory (although this is a relative term!!).
Today we were out catching again on Strangford Lough, this time at Cross Island, which has become one of the most regular autumn sites in recent years. Two nets were set along the edge of the bay, and both locations proved successful, with seven birds being caught in the first catch, followed by a further eight being netted in the second, just after the initial geese had been processed. 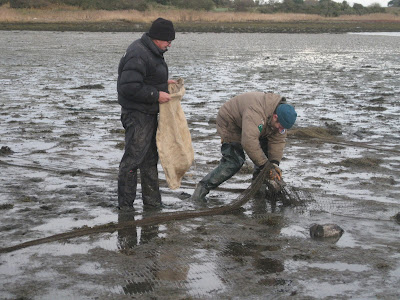 Such smaller catches are quite normal when catching on the shore, as birds can be more dispersed than the often tightly-packed landward flocks.
It was a particularly useful result of today's attempts that only four out of the fifteen birds caught were adults. That means a further eleven birds of known age have been added to our listings. All fifteen were newly caught birds.
These latest catches bring the grand total of birds caught to 5,052, a magnificent achievement by our canon-netters and all their volunteer helpers (many thanks to everyone!!). Of these, 360 birds had been caught before, so the number of individuals caught is now 4,692, since the programme of catches commenced in 2001.
Posted by Unknown at 19:18 1 comment:

Our colleagues at University of Exeter have just released this video on youtube. Highly recommended, as it gives a great flavour of what the geese get up to all the year round, not just when they are on our local patch over the winter.

One of our GPS collared birds has been having a very strange autumn!!
7VBY was first seen by myself at Ballykelly, on Lough Foyle, on the north coast of Northern Ireland, with a mate, 9ABY, on 14 September. Didn't even notice it had a collar (I'm a legs man!!). Alex Portig  then recorded it as a collared bird down on Strangford Lough on 23 September, but on 02 October and 03 October, reported by photographs from Gary Platt and David Hill respectively, it was back at Ballykelly. The photograph of the bird landing in (how do these folks manage such sharpness!) was sent in by David: 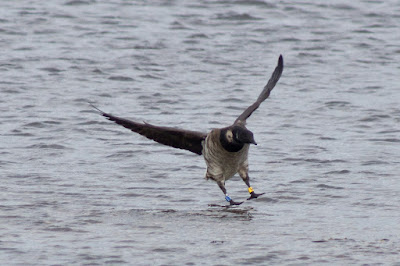 Now, tonight, news from one of our southerly outposts, the Incleville Saltmarshes at Regneville in Normandy, France, from Alain Livory and Rosalyne Coulomb, that 7VBY has arrived there safely, together with 9ABY.

Birds on the Move...

I was out at the north end of Strangford Lough this morning, and couldn't help noticing that numbers appeared to have dropped significantly.
This observation has been backed up by a text this evening from Patricia Watson, reporting a massive increase on her home patch at North Bull, Dublin.
I wonder whether similar increases are being experienced elsewhere?
Posted by Unknown at 19:56 No comments: