As I write the Dublin-based team, mostly comprising the Exeter researchers led by Stuart Bearhop, are processing a very nice catch of 60+ individual Brent in a week that has seen March go out with a roar! This catch is at Bull Island - thanks to all who are assisting with this catch and of course who spend time without such reward on the days when there are no successes.

As is typical for this time of year the Brent are spending much of their time grazing on the extensive saltmarshes where they are available - Dublin being one site where there are extensive saltmarshes especially around Bull Island. This presents its own challenges as the topography is often tricky for accessing and setting nets and of course, depending on the heights of tides there can be a risk of flooded nets.

Today's catch follows a series of smaller previous catches in Dublin last week, a small catch on inter-tidal habitat at Carlingford Lough and a nice BIG catch (after 2 1/2 days of perseverance ca. 59 birds) at Dundrum in Co. Down (see picture). 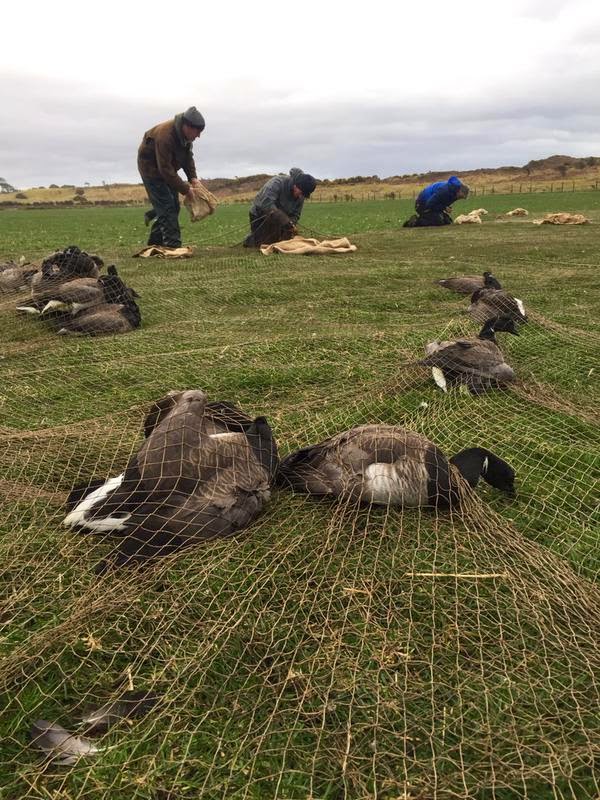 Safe to say that Stuart was rather pleased that all the time spent payed off! 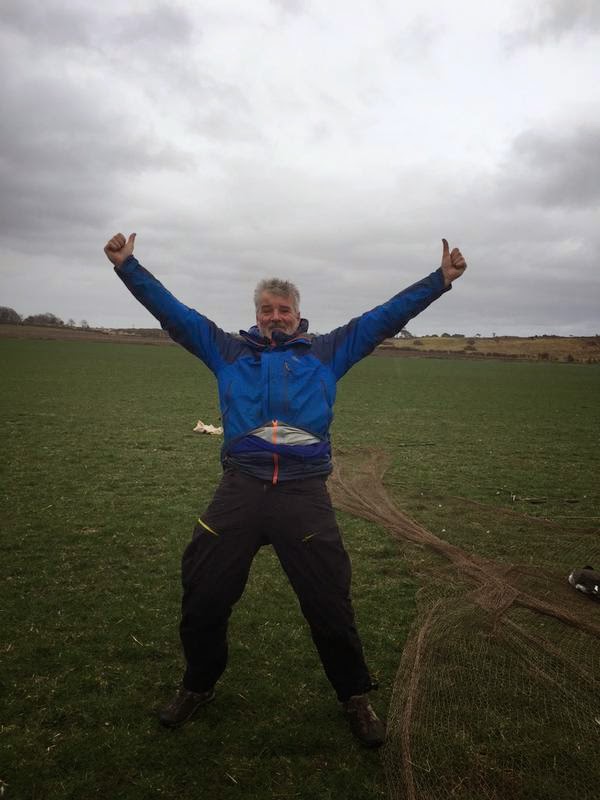 As ever there are further updates via twitter feeds (e.g. @StuBearhop) and Facebook links to some of the team.

Our first major attempt at catching in the Dublin area this year, met with mixed success, although if you had offered me a total haul of 80 birds at the start of the week, I think I would have taken it. We began the recces mid week and as many of the Dublin resighters had already noted, there were a lot less geese around than usual and they were not quite as predictable as they often are.
This seemed to change a bit towards the end of the week and over the weekend, with large flocks regularly out on the grass at Springfield Road, Seagrange Park and Greendale.
However we were also keen to check some of the sites around Rogerstown/Rush as in previous years this had held proportionally large numbers of Canadian-ringed birds and we were hoping to spot some of the birds we had marked during summer 2014. So were excited to see a number of RBs (including at least one family) in the first flock we spotted out on the green next to shore road. Good numbers of birds were joining this flock and it looked like potentially the best place to start thinking about a catch.

We met up with Pat Linders the following morning and after gaining the necessary permissions we were able to set a net. We spent much of the day freezing in the strong SW wind and snow flurries. There were a couple of close passes, but the geese have an uncanny knack for “knowing” almost to the millimeter the catch area of the net and they scuttled around the outside of catch on a couple of occasions (we were also thwarted by dog walkers with luminous jackets and the local Gardai). It was looking like another one of those days as a massive ominous grey cloud loomed in the west, the tide was dropping and all of the birds were now feeding out on the mud flats.

The snow had just started to fall when a small flock of around 40 birds landed back on the green and right in the centre of our catch area. Tom got the firing box ready in record time and we fired almost simultaneously. There were 32 birds to extract as a fairly impressive blizzard hit. We sheltered the birds under a tarp and by the time we had finished the ground was a slushy white colour.
The team comprised: me, Tom, Ian, Freydis and Pat and so we spent the next 3 hours or so furiously processing. The new colour combination for this year is Blue Yellow (see Pat with AABY). We also ran into an old friend from Canada this summer NARB (see pic with Freydis). Finishing just after sunset, all birds flew well into the strong wind on release.

A great start to the week!

The next few days proved much more frustrating. We set at Seagrange Park Tuesday-Thursday and had visits from Graham Mc, the Pats (Watson and Lynders), Niall, Liam, Mark, Ash, Adam, Deirdre and Darren (all three from Trinity), Andrew Kelly and Cian. We had birds close to the catch area on several occasions, but no joy. They were just a bit more jumpy they normal. Indeed on Thursday, we had no birds at all up to 1pm so we lifted and moved up to Kingfisher Green, where they had been pretty reliable all week. It was late in the afternoon by the time we set here, so it was no surprise, when the birds moved off to the estuary, not to return. We returned here on Friday morning setting a full net and a half net to maximise our chances.

Alan Lauder arrived to help with proceedings and we were later joined by: Miryam, Susan, Niall and Cian along with Declan Clarke and a small team from the North (Owen, Miriam and Shanna). We very quickly had birds in catch and were just about to call fire, when a helicopter flew over and sent everything out to the estuary. After about an hour the birds showed no sign of returning and so a couple of us walked out on the saltmarshes to try and move the feeding flocks that had assembled. The birds moved and very obligingly settled on the green, about 200 or so. We tried at first to twinkle them into the half net, but the invisible barrier reared its ugly head again and so we went for the longer approach, with Alan gently pushing them into the wind and towards the full net which was hidden the longer grass at the edge of the green. Within a few minutes we had birds in catch and fired (see a video here: https://www.facebook.com/video.php?v=10153044802275709&l=2910929842652264053). A good catch of 48 birds and only two birds ringed, which will be a surprise to anyone who knows this site. The team were excellent and the last bird went into the keeping cage, just over three hours after we fired, a superb effort from all concerned.


This last catch somewhat saved the week for us, Alan, Tom, Ian and Freydis, tried again on Sunday, but had no luck. So there are 75 new BY ring combinations to be read out there, flying in the face of convention (don’t ask me why) it is the yellows that we have held constant. So there are yellow A, B, C, D & Fs out there if any of the Dublin crew fancies a look. We are heading back over in a couple of weeks, hoping for more success, so if you live in the Dublin area and are reading this please come along or pass your email details to us so that we can keep you posted.