What we hope to learn using social networks: Part 1 - Do different geese have different "social strategies"?

Constructing social networks for our study populations of brent geese is all well and good but to take advantage of their full potential its important to use them to answer specific questions about individuals or the population as a whole. Perhaps the most simple questions to answer using the information available in a network is to ask whether individuals have different "social strategies" and whether these are consistent or vary over time, either randomly or because of changes to an individual's status or the environment that it finds itself in.

Individual geese could follow any number of different social strategies, with the formation of lots and lots of weak social associations, and forming rather few social associations that are much stronger than expected by chance being the extremes. If these extremes do exist, the using social networks to find out which geese follow particular strategies could be important in understanding processes happening at a population level. For example, if a goose forms lots of weak social interactions it may be important in connecting different parts of the social network which could make it more likely to be important in spreading diseases through the population. 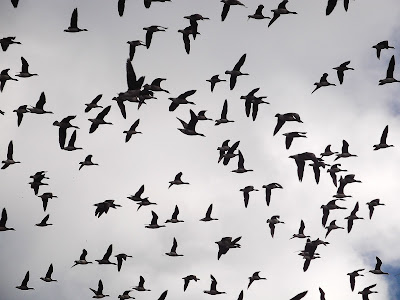 Obviously the importance of social strategy depends on how consistent the type of social associations are for each individual. If the social strategy of an individual is random and varies greatly over short time-scales then there is only so much we can learn from the social networks. However, if particular individuals or types of individual (those that are unassociated or in poor body condition say) tend to consistently form similar patterns of association in multiple networks constructed over different time periods then the differences we can find in "social strategy" by looking at our networks our real and of great importance. The causes and consequences of these variations in social strategy will be discussed further in future posts.

With all of the resightings from the Irish winter now entered into the database by Graham there are now 102,277 records of our colour-ringed birds up until the end of this winter - an incredible effort for such a young project. This year alone observers have resighted 1867 different geese a total of 13,065 times as far a field as Ireland, Iceland, Scotland, Wales, England, France, the Netherlands and Canada! With all the records still to arrive from Iceland this spring, there'll be plenty more records to come as well....﻿
Posted by Matthew Silk at 09:48 No comments:

Remember this: http://irishbrentgoose.blogspot.co.uk/2012/03/my-research-in-dublin-colour-rings-and.html - seems like a long time ago now! I figured it was about time I wrote some more about social networks and social network analysis as they are so integral to our work. So here goes again:

Back in March I introduced the basic concept of what a social network was and how and why we use them, so I'll use this post to introduce some more "in depth" social network ideas and some more complicated network pictures - hopefully meaning when the full social networks are posted from Dublin or Alftanes they won't take too much explaining....

The social network in that March post is about as simple as could be. It contains relatively few individuals (nodes on the graph) and edges (the lines connecting them) are present if two individuals have associated and not present if they're weren't seen together. Clearly a social network could include a lot more information than this. For example, it is useful to have the edges weighted by how strong the association/interaction between two individuals is - whilst weak associations between individuals can be important, it is generally much more interesting to know that two individuals interact frequently, especially for our research which is focussed on investigating "friendships" or patterns of social interactions. Below I've reproduced the same network as in that first post on the subject, but this time with edges weighted by how often individuals are seen together. Clearly networks that contain information on the strength as well as the presence of associations contain lots more useful information. 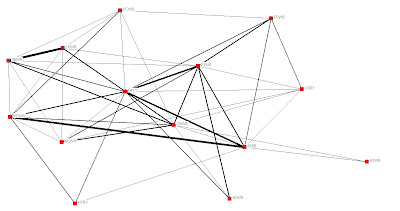 ﻿
Part of a brent goose social network. Lines join individuals that have been seen together three or more times. The thickness denotes how strong the connections are 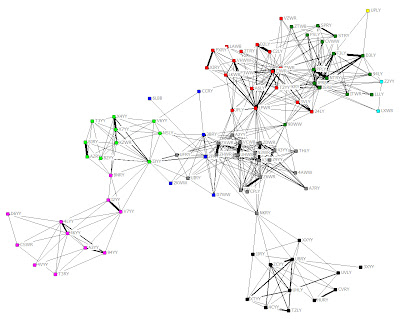 A brent goose social network from the Alftanes peninsula this spring. Edges are weighted by the strength of the association between two individuals. The colour of each node represents which social community an individual belongs to

Clearly this sort of situation is where we need to start using the properties of each node (called metrics) to fully understand an individual's position in a social network, and I'll introduce the more important of these in the next post from me.﻿