As I think I have indicated before, the main passage of brent geese through Strangford Lough has now well passed its peak. It's therefore of considerable interest to us to find out where the big families we ringed out in Canada this summer have passed on to.
In reports I've checked coming in to date (and sorry to those of you waiting for feedback, because I always seem to be running behind!), two big families have been reported. First, on 25 November, was from Alyn Walsh from Wexford Wildfowl Reserve, whom you may remember was part of the catch team out in Canada - photo of him standing with an adult from the catch of the birds he was now reporting on, below: 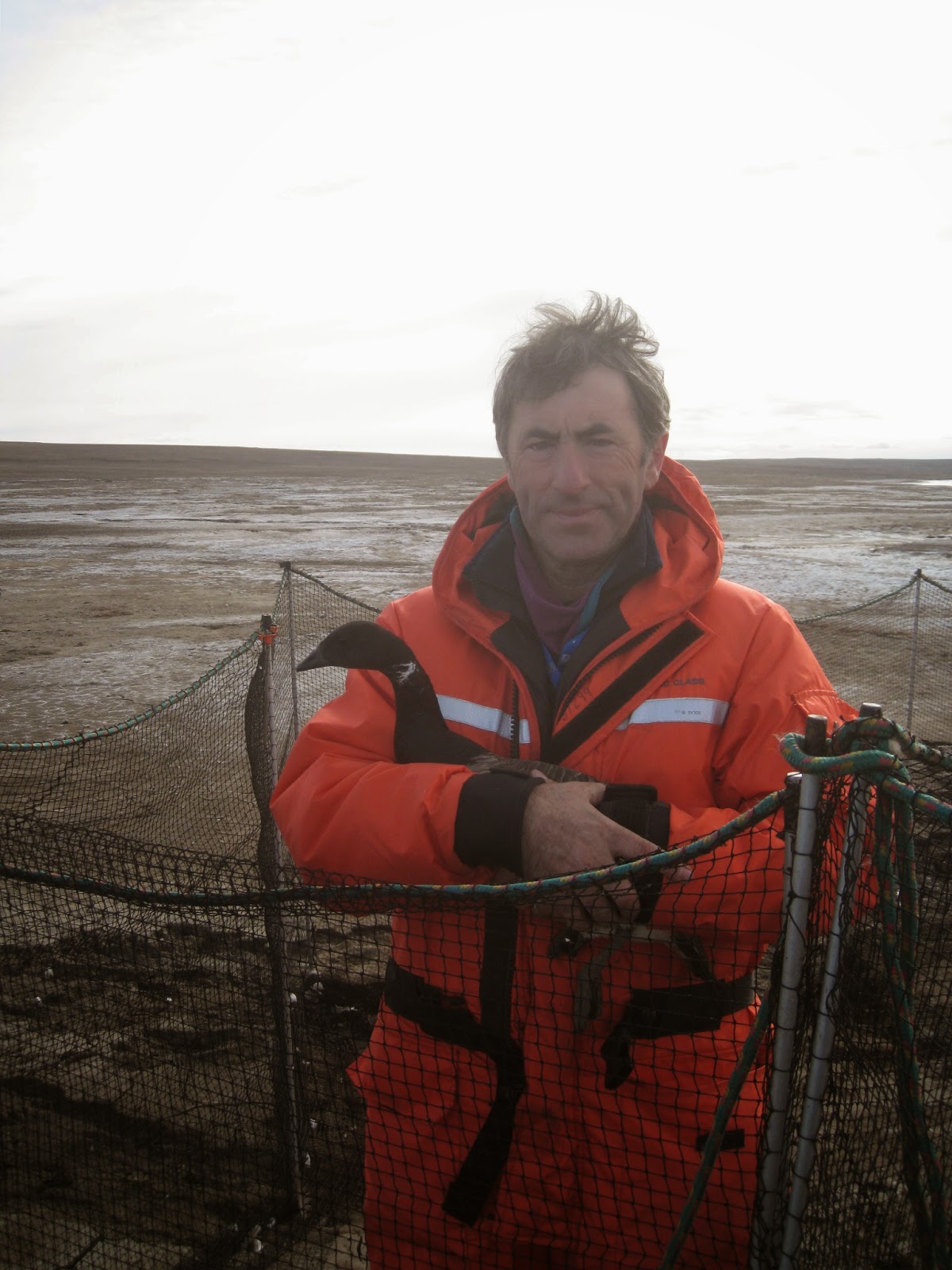 This was of a ringed family of 2 adults and 4 juveniles, which had earlier been recorded passing through Strangford Lough.
Then, tonight, I have a second report, from Mick Cowming, of a big all-ringed family at Tramore Back Strand, Co. Waterford. Again this family had been recorded passing through Strangford Lough. Given the melee of young birds which can happen at the latter site, it was recorded there as 2 adults and 4 juveniles, but Mick has now shown the family also includes a fifth juvenile. The missing bird happens to be the last bird we ringed in Canada, so I'm actually able to provide a photo from when it was being ringed, rings complete with Sellotape: 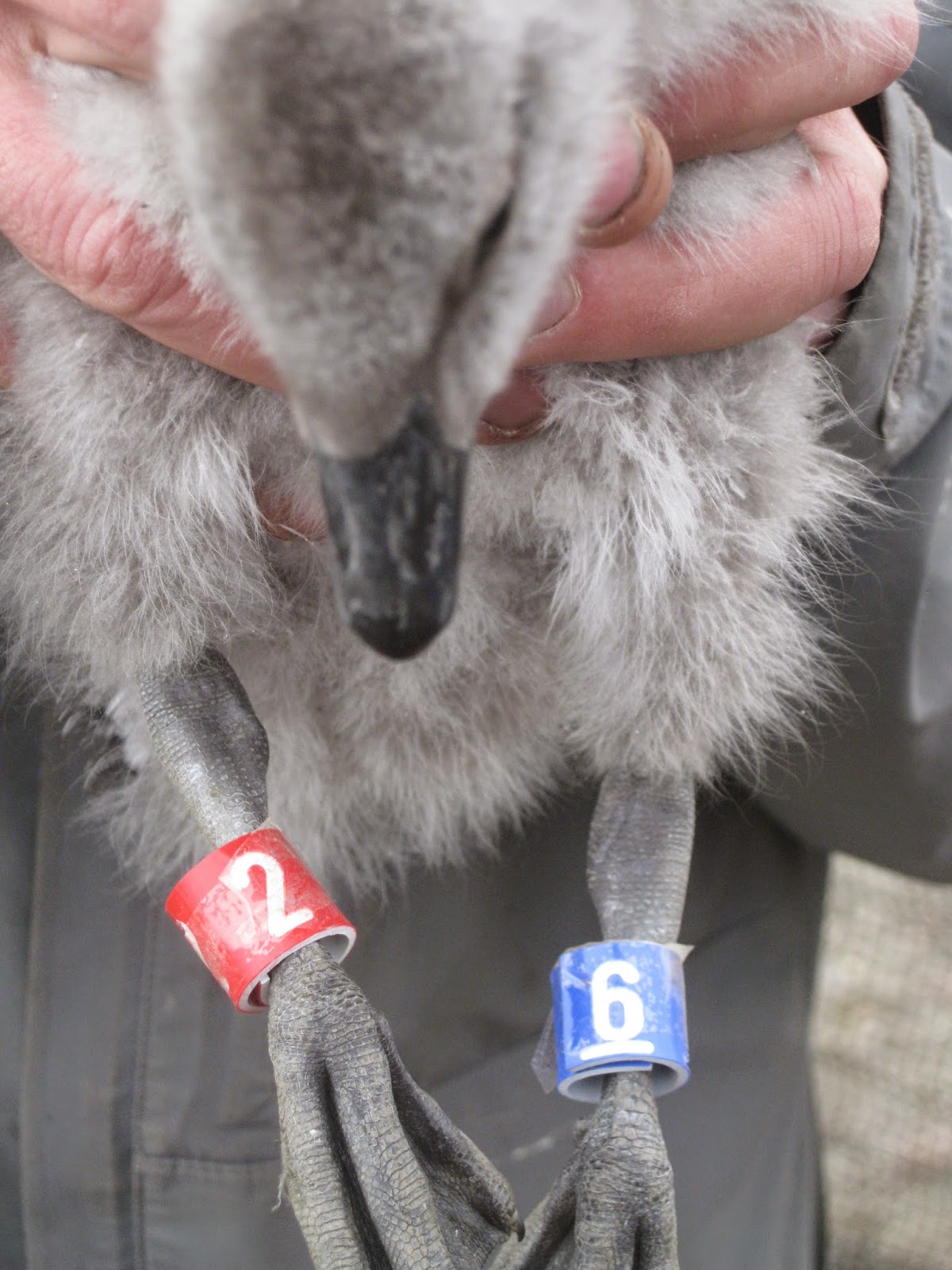 Let's explain the Sellotape. The plastic (Darvic) rings open out, so that we can get them over the legs (you can see the overlap in this photo, particularly on the blue ring). To prevent the rings opening up and migrating down over the foot, we have to weld the two sides of the ring together. For this we use welding glue, and to ensure that this gets time to act, the Sellotape restrains the ring for sufficient time to enable to bond to be made.
SO - now it's up to you!! How many of our big RB Canadian families we spent so much time and effort (and expense!!) catching, can you find???
By the way, 26RB wants it to be stated that she is a big girl now!!﻿
Posted by Graham McElwaine at 21:30 1 comment:

Today found a small team of us up at Cross Island, at the north end of Strangford Lough, attempting to catch more geese. Two of the smaller half-nets were set, and, under canon-netter Kerry Mackie from WWT, sixteen birds managed to wander into the catch zone of one of them, and bang!! they were soon literally in the bag!! 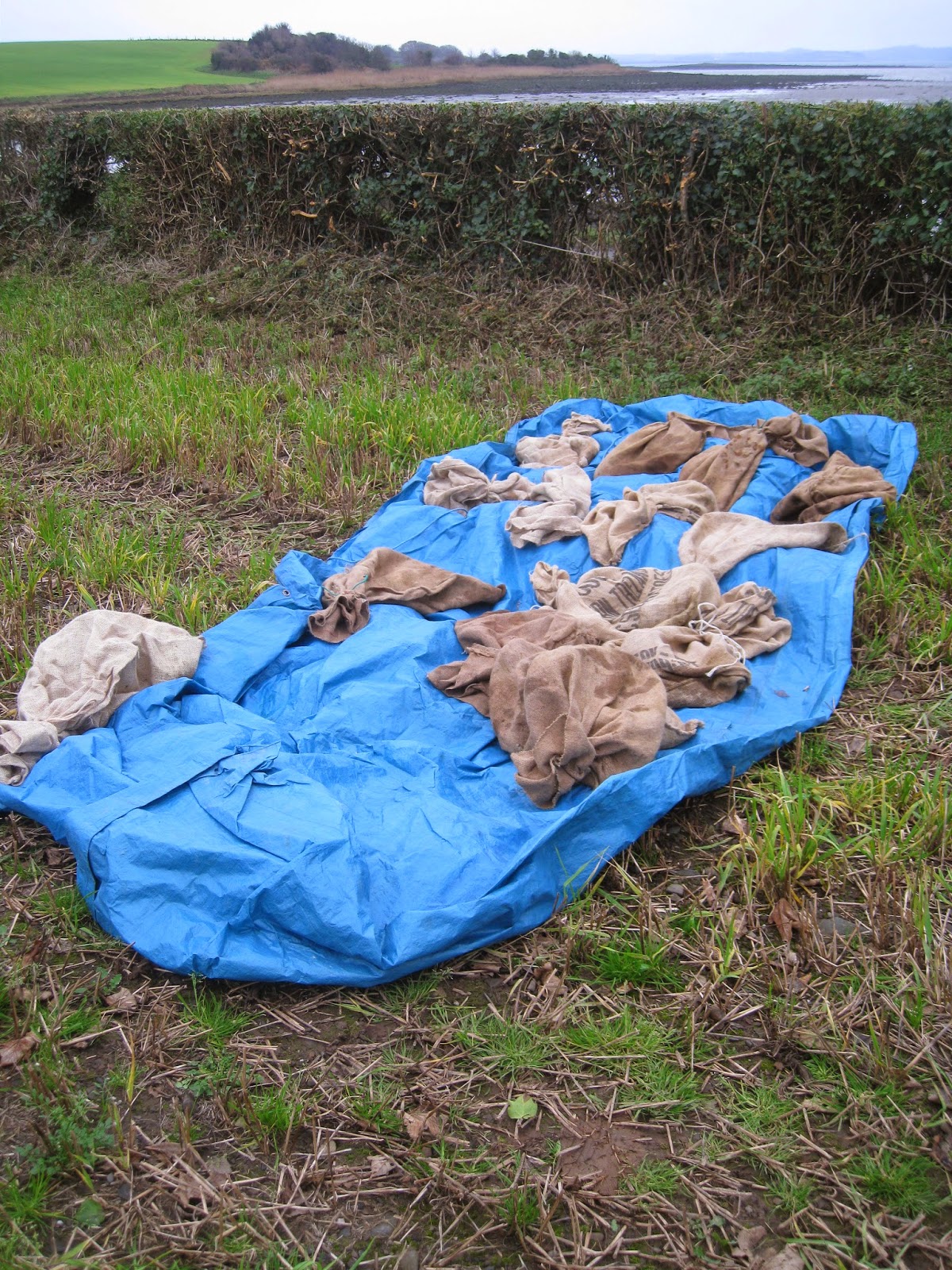 ﻿
The reason for bagging the birds is that it keeps them calmer whilst waiting to be processed, and following the latter the birds are placed in a holding tent prior to release. Birds are all released at the one time, to help to keep families together. In this case, half of the birds were juveniles which had been produced during this summer's breeding season. 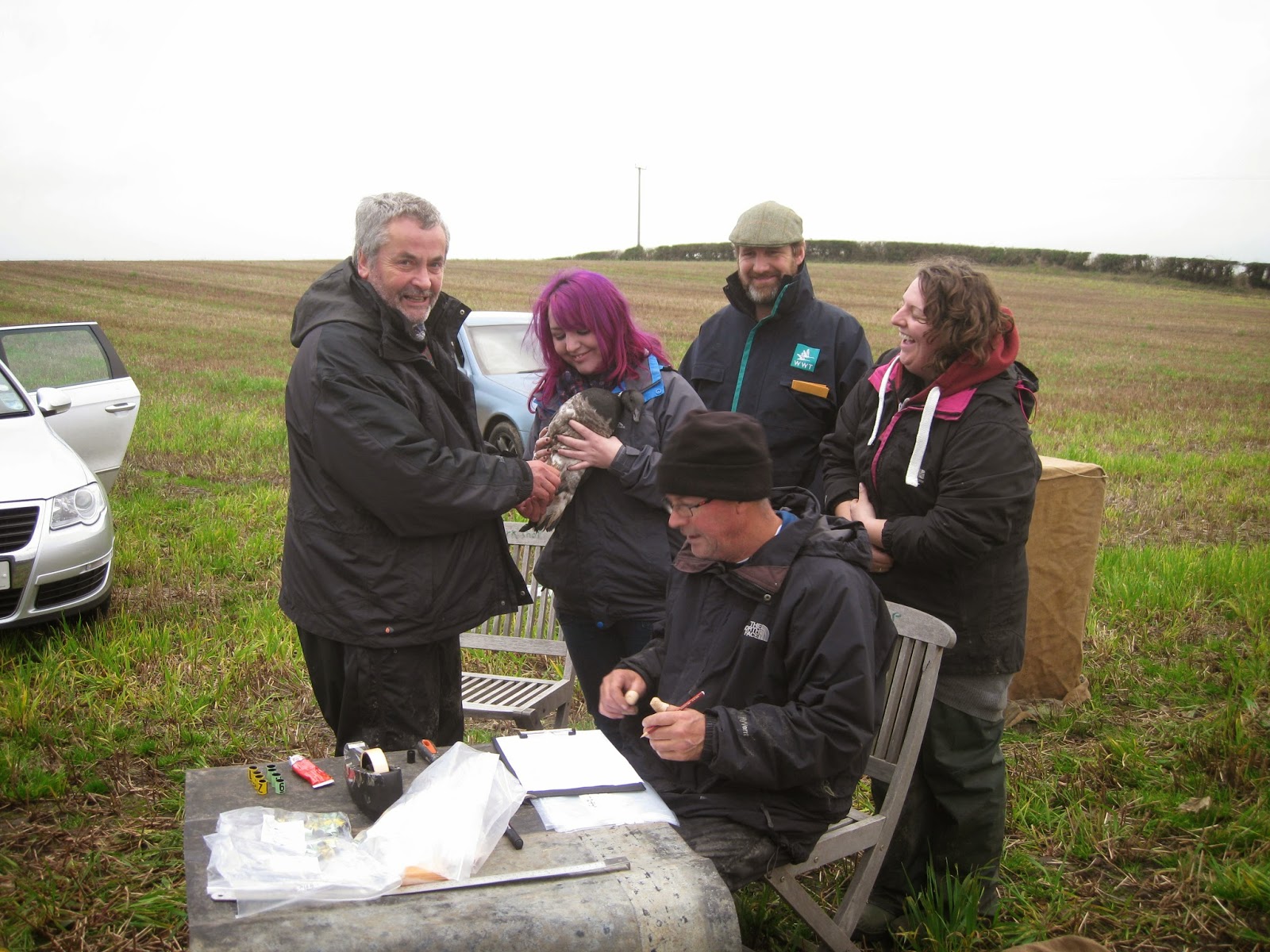 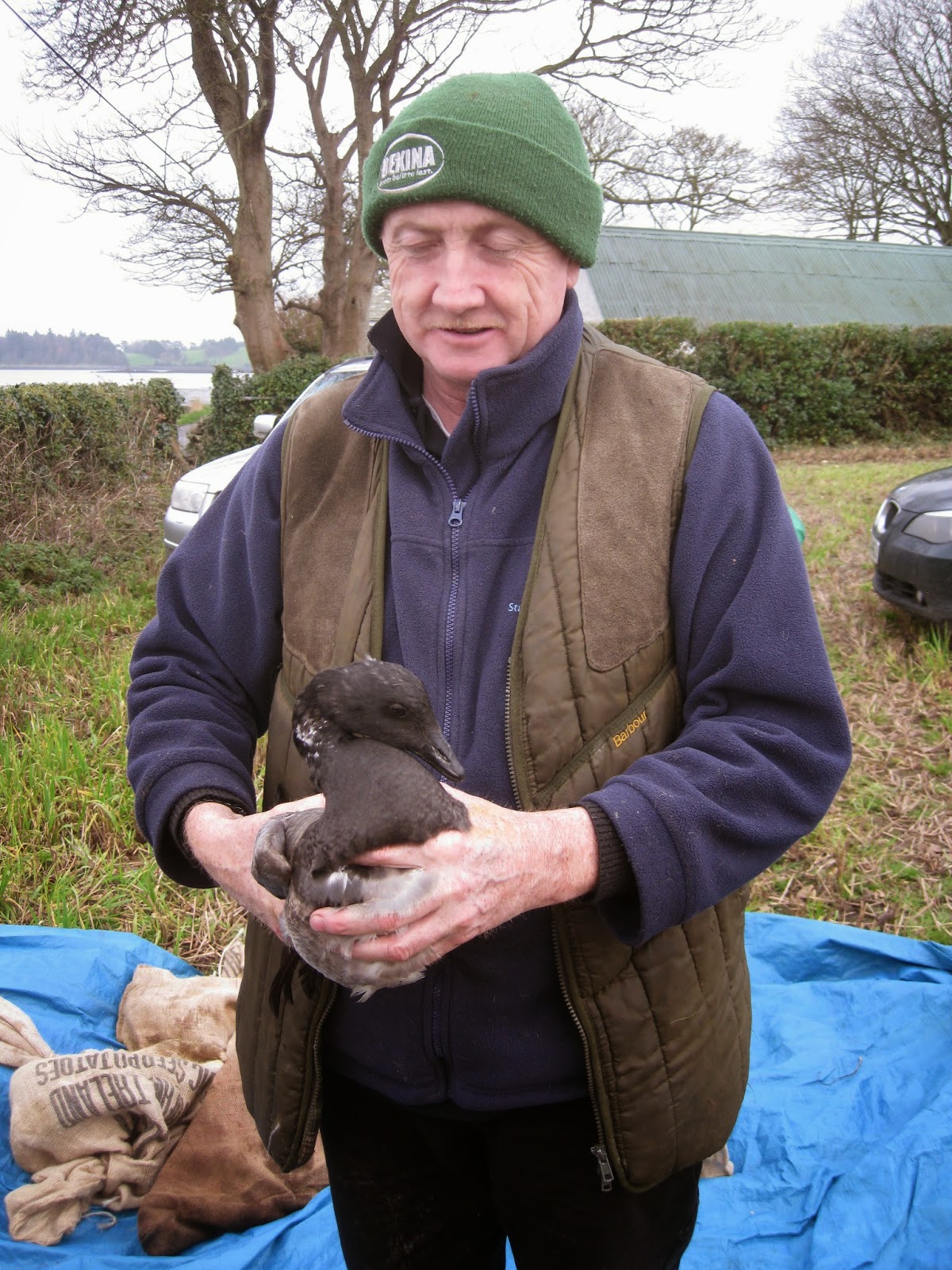 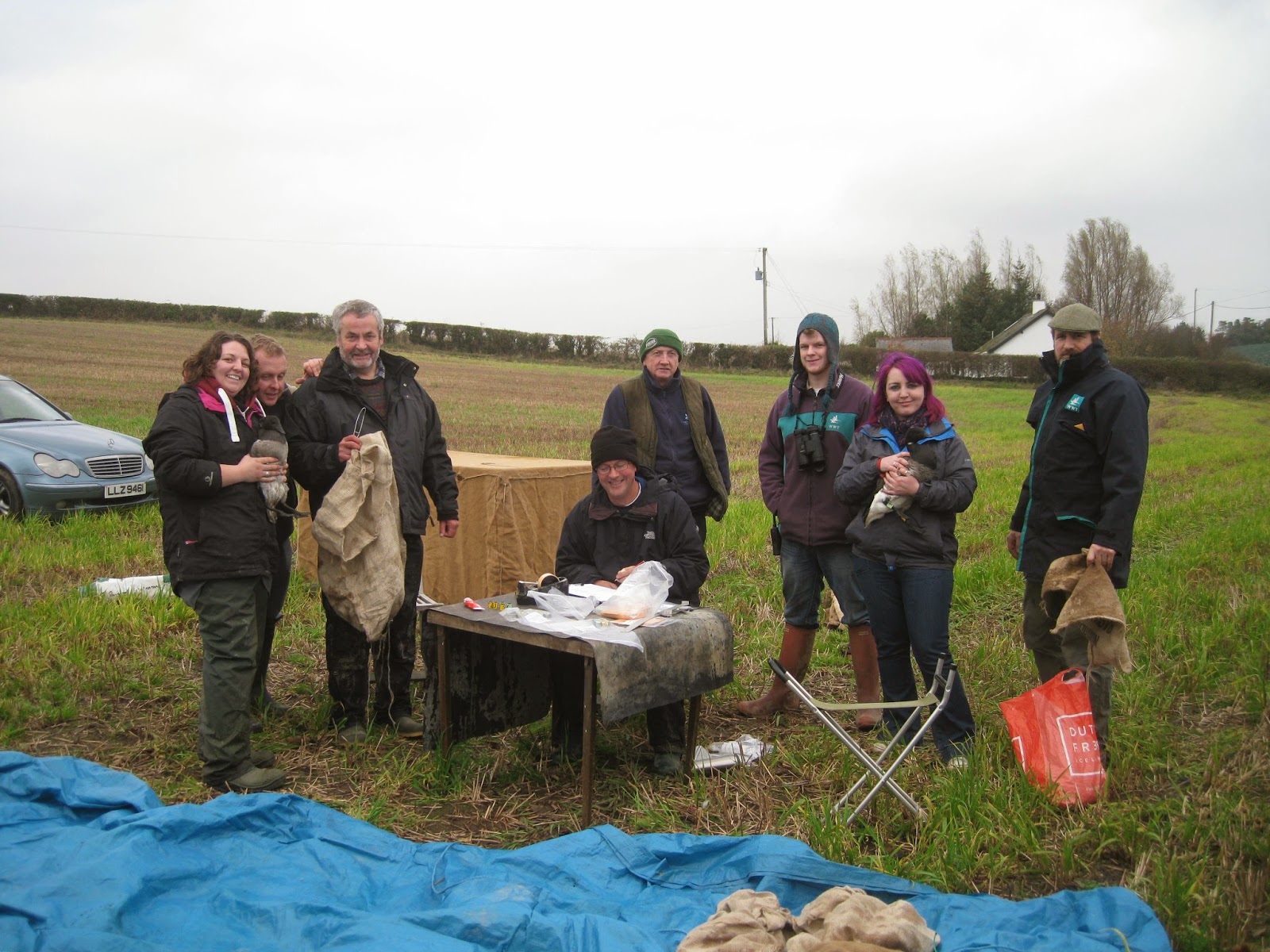 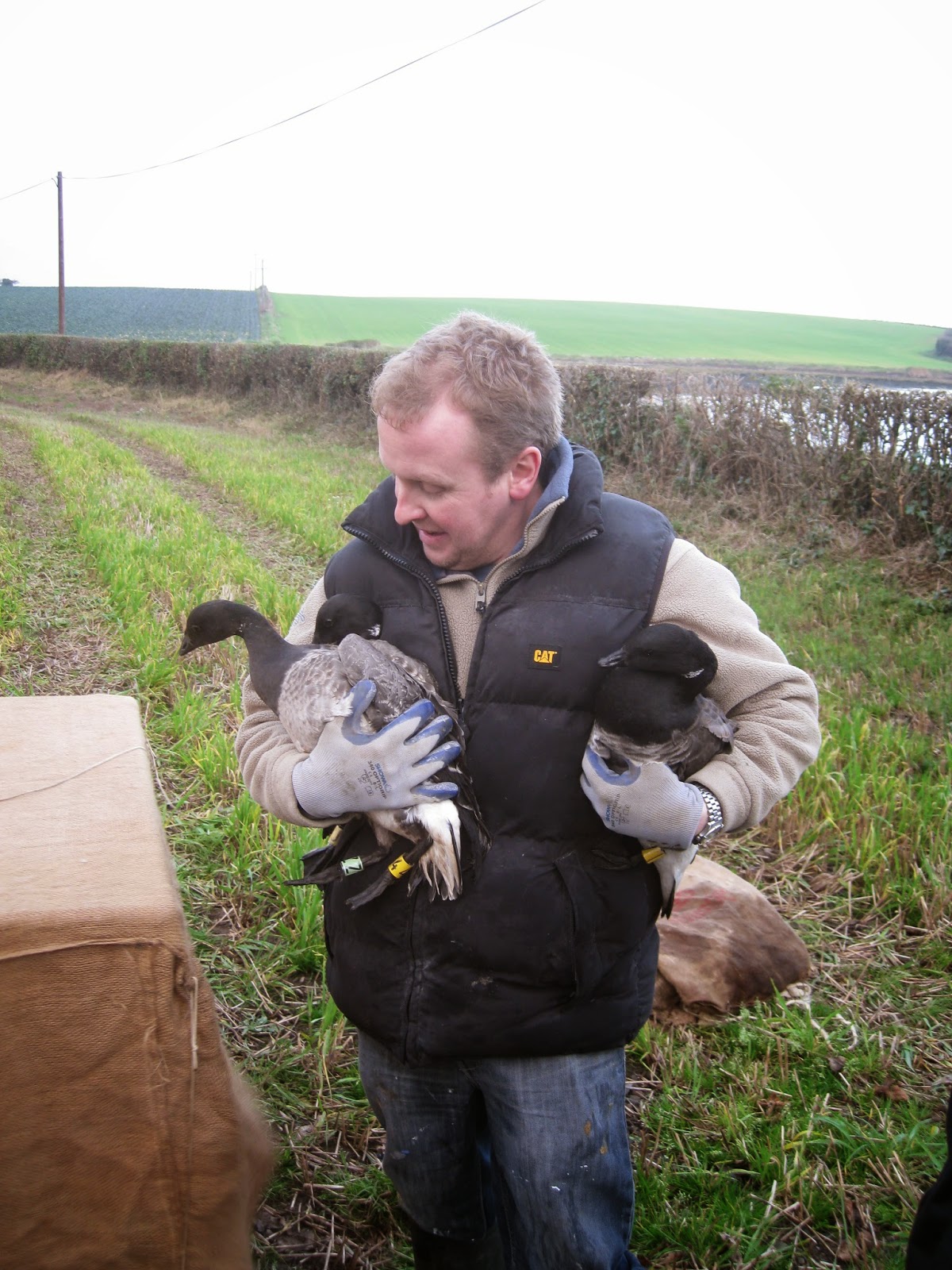 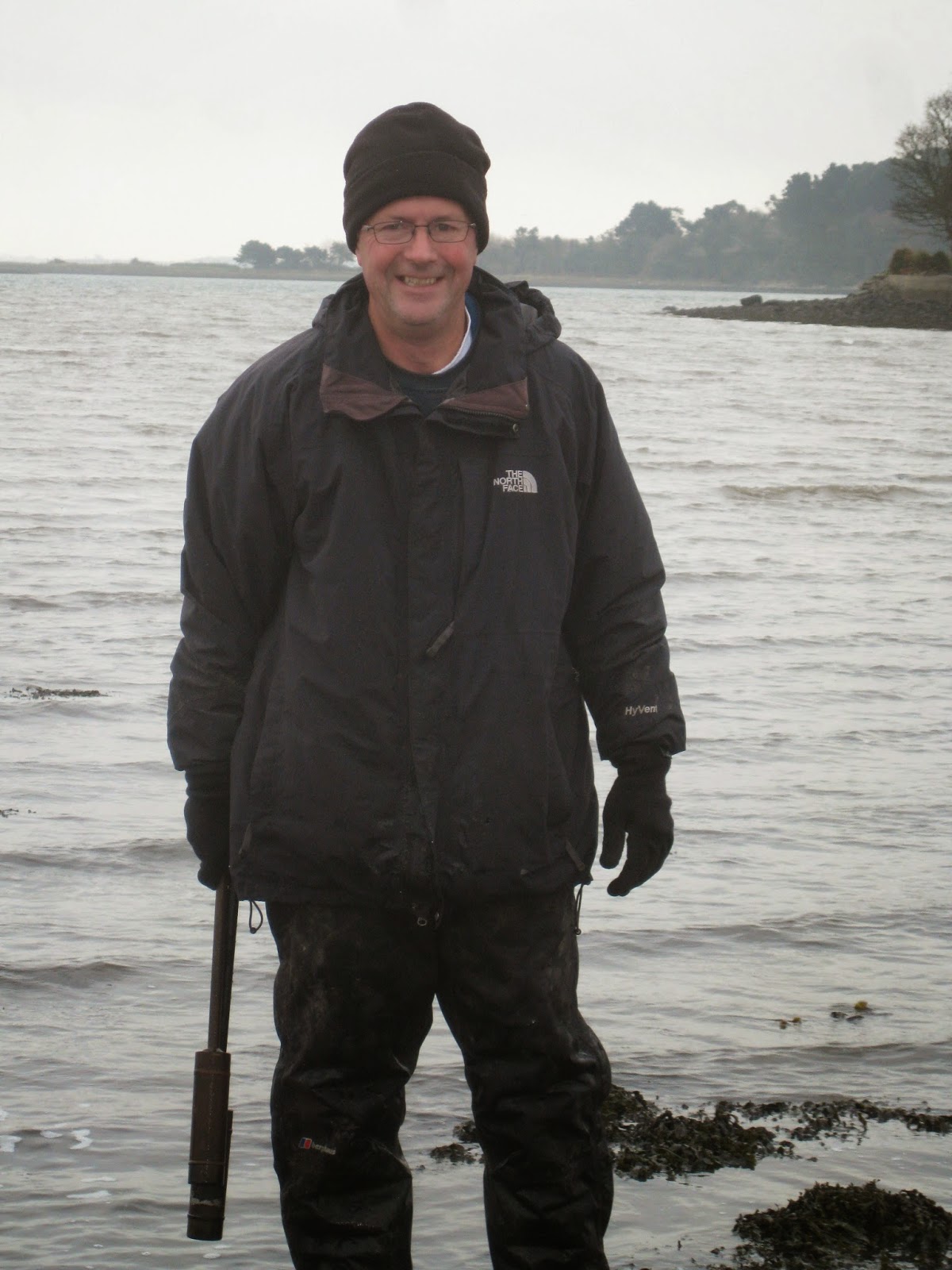 Some shots from today above. Now the search is on to try and sort these birds into families, before they move on to other sites. All birds were ringed with a lime-green ring on the right leg, and a yellow ring on the left leg. This is an old series, and today we were using combinations which, for one reason or another were gaps. So, if you come across a juvenile with a lime / yellow combination, it will be from this catch.
Posted by Graham McElwaine at 18:44 1 comment:

I expect most of you may have watched this before (unlike me!!), but Tom Carroll from Dublin has just highlighted it to me...
BBC IPlayer Autumnwatch 2014 Episode 4 Starting c. 42 minutes 50seconds in. Strangford Lough - superb!!
Please feel free to highlight any other programmes dealing with brent geese that you find, so that we can share...
Posted by Graham McElwaine at 23:45 No comments:

A Couple of our Contributors in Their Own Habitat (BUT you need to be quick!!)...

Firstly, Hugh Thurgate, with the National Trust on Strangford Lough, Co. Down, takes viewers for boat trips on Strangford Lough, first showing their new ferry to transport cattle to and from the islands for habitat management, then talking about seals in the Lough, with Ben Fogle. This is currently on UTV Player, if you look up "Countrywise" for 10 November 2014, and starts c. 08:30 minutes in.

The other is Paddy Dwan, who is an expert on the Tramore Backstrand, Co. Waterford, and has recently co-authored a book on the site. He and his co-author, Mark Roper, do a piece on the wildlife (including brent geese) of the area on RTE nationwide last night, 14 November 2014, which currently can be found on RTE Player, and starts c. 18:45 minutes in.
Posted by Graham McElwaine at 21:25 No comments:

Apologies to all of you who have been trying to follow the blog, and thought we'd all migrated ourselves!! Unfortunately, this may happen from time to time, either because there is nothing meaningful to report, or more likely because we have been busy (or like to think we have been!!).
In this case we have been doing things on three fronts:

One possibility which was being actively researched was this site at Mill Bay on the County Down side of Carlingford Lough. A local farmer dumps potatoes on the edge of the mudflats, and the geese can't resist the chance to come in and "scobe" at them - not sure whether this is a "Norn-Iron" (Northern Ireland) speciality word , but it means scraping (and chewing off bits) at them with their bills to eat. 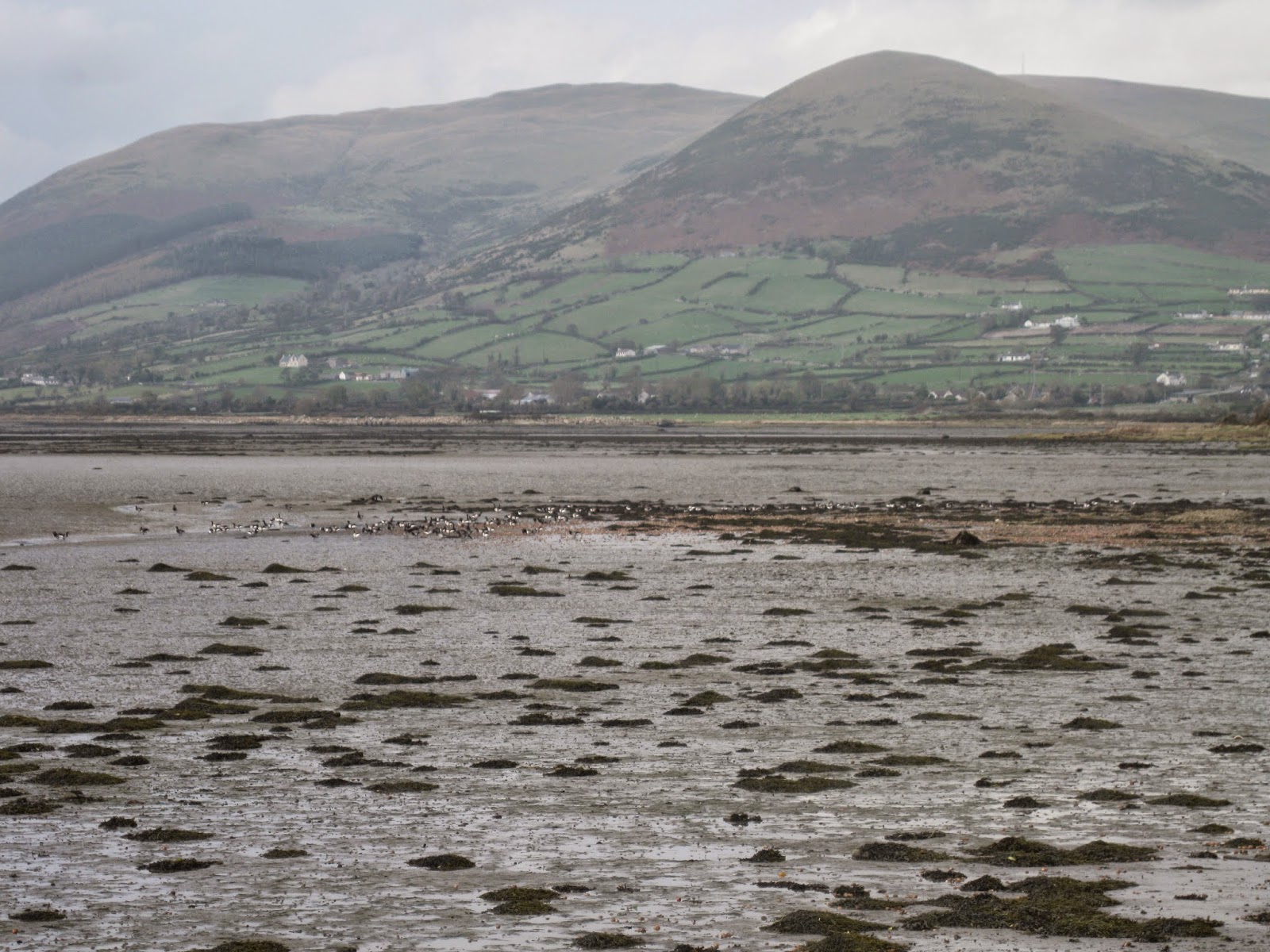 We have tried here before, but not been successful, and again the lack of time to "recce" the site, which is not very close to any of our houses, seems to have beaten us, as numbers had halved from the original [220] on 01 November, when this photo was taken, down to 124 a week ago, and today there were only about a dozen. But this illustrates the importance of very regular "recce" work - the birds have very much got choice on where they are using, and it's a VERY small net!!

Again I have highlighted in an earlier blog the need to try and read marked birds amongst the massive flocks, as they pass through Strangford Lough. The statistics as I write this blog are, I think, impressive, as a core team of us (added to, of course, by casual records from many of you, which are always useful and valuable) have amassed 2,653 records of 936 individual birds, which is way above what we had managed by this stage last winter. Overall, the resighting figures this year to date are 3,038 and 1,100 respectively, so well done everyone!

Rather later than normal, the annual autumn Census was taking place last weekend. This has meant that birds have been much more dispersed than usual, but, thanks to all of you who responded to a VERY late call, it looks like we have been able to do a proper co-ordinated "snap-shot" across the wintering range in November. This is possibly the first specific brent survey for that month. Results are still being collated, but watch this space when we have finalised on this!

Sorry again for the gap in blog. If any of you have anything you'd like covered, please just let us know!!
Posted by Graham McElwaine at 20:52 No comments: