As Kendrew said in the last blog, the Group had two teams out in Iceland this spring, one to ring-read (us!!), and another to catch and ring geese. The latter team are still in Iceland, so I will leave them to report on the blog about their efforts when they return.
"Team Jameson", all from Ireland, this year sadly with Gerry Murphy absent due to back problems, formed the ring-reading crew, and were Patricia Watson, Alex Portig, Cian Merne and myself. Kerry Mackie, who is a licensed canon-netter, also used the new CHEAP Easyjet flights ex Belfast International, and was also there for the same period, but was separately instrumental in assisting the catch effort.
"Team Jameson" traditionally concentrates on trying to ring-read north of Reykjavik, where the birds are more dispersed, less well covered, and perhaps more distant.
Combined with the fact that it had been a very cold winter there, we were visiting Iceland rather earlier (about a week) than normal, and it soon became clear that the "grass" fields normally used by the geese were still grey/brown, and few flocks were using them. This led to ring-reading being normally concentrated on the fore-shore at water splashes, like here, just below that amazing Kirkjufell mountain at Grundarfjörður﻿ 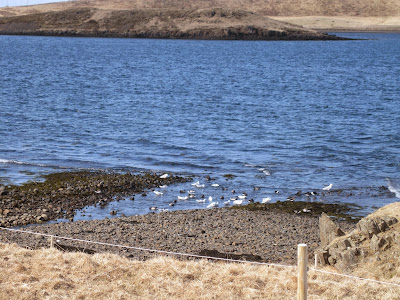 and at Kolgrafarfjörður, further East 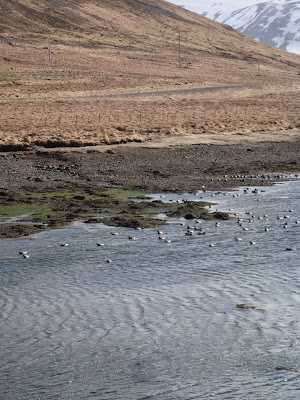 Because conditions were so difficult (and in addition the birds were very flighty, presumably as they were undecided on whether to come out on land), the numbers of geese read were MUCH less than normal.
HOWEVER, I CAN report to our Normandy observers that we managed to read FIVE out of your 17 regulars whilst there - BPRY & BVRY, CFWW and KDRY & KIRY!!
With birds being so difficult to identify, and with the catch team's requirements being rather specific (to catch birds recently caught  in Ireland), we were also able to highlight to the other team where such birds were present up-country, and possibly catchable.
One of the other benefits of visiting Iceland is that we get to meet long-time friends, and to experience their hospitality. This time it was particularly great to spend an evening with Guðmundur and his wife Solveg who had also kindly invited Svenja Auhage and her husband. A few nights later, Oli and Helena Torfason also opened their doors wide to the whole group, and on both occasions we felt very specially welcomed.
It was also great to meet up with Magnus Magnusson and his partner, Thorgirder, and Oli Eirarsson, whom I first came across when I first came to Iceland, catching whooper swans, way back in 1995!! 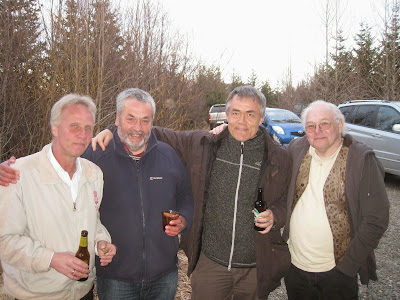 Oli Torfason, me, Oli Einarsson, Magnus Magnusson (records do not recount how much Jameson disappeared whilst taking this photo!!
﻿
Posted by Unknown at 23:05 No comments:

It would be great to be in Iceland - where the core teams now are - but my view is of the Mourne mountains shrouded in cloud, trees blowing in the wind and a herd of cows happily munching very green grass. No Iceland for me!

By the looks of things, the grass isn't quite so green in Iceland. The one picture I've seen was of a generally brown, cold- and wind-burnt set of fields which is not untypical for what the Brent encounter when they arrive in April and early May. A very marked contrast from the rich grass they last munched before they left Ireland.

Our migrant goose researchers are also staging this month in western Iceland, catching and tagging Brent and reading rings. This spring is the 12th spring there has been a significant UK/Ireland involvement in the Icelandic staging grounds. I expect we'll get a few reports as the weeks go on though, from bitter experience, the fieldwork days are very long and there isn't much time for typing on a computer!

Numbers of birds left in Ireland continue to dwindle. As usual, those left tend to be family groups, presumably being held back by a juvenile not quite ready for the long journeys ahead.
Yesterday, at Dundrum Inner Bay, County Down, numbers were further reduced from the 60 or so which had held for about a week, down to 22. Amongst them were old favourites, F6WW and LUWW, with their newly ringed juvenile, UHBY, which has an unringed sibling. Target for the catch on 28 March 2015 at Dundrum had been these old WW rings, which were mainly ringed in the period 2006 - 2008, many of which are now showing their age, and are getting difficult to read in the field. The recent catch resulted in 7 such birds being provided with new rings, together with another old Icelandic ringed bird. As the plastic rings deteriorate with age, it is vital that a programme of catches aimed at ring replacement be maintained.
The only other report of any sort of numbers over the past couple of days has been from Tony Gallagher, of 25 at Keadue Strand, County Donegal, on 30 April. We would be keen to know details of any other flocks which have yet to make a move.
It was with some surprise that I was contacted on 30 April by Ciaran Hatsell, Senior Assistant Warden at the Fair Isle Bird Observatory, Shetland, reporting that P2WR had paid a visit, and had probably been there since 25 April. This was our first ever record of a ringed bird from Shetland, and Ciaran tells me it is their first brent goose record on Fair Isle since 2010!!
They say lightning never strikes twice, so it was a double surprise when I was contacted yesterday, 01 May, by Dave Okill from the Shetland Ringing Group, to say he had found another brent goose at Sullam Voe, Mainland Shetland and that it was ringed too!! In this case the bird was PSRB, one of the birds we ringed on the breeding grounds on Axel Heiberg Island in High Arctic Canada last summer.
Both these birds are considerably off the direct route to Iceland, so it will be very much of interest to see whether they manage to rejoin the rest of the flyway population. Watch this space!!
Posted by Unknown at 11:29 No comments: