I'm still hard at work in Cornwall, with presentations to give, things to organise and plenty of computing to be doing. Its not long until Ireland now though, with a brief trip to Strangford next week for the Irish Brent Goose Group AGM and then plans to start my field season proper early in November. In the meantime here are some pretty pictures from Cornwall, some science and a real bird! 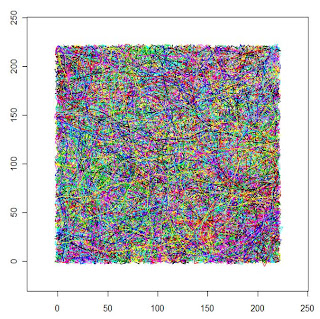 This graph is the output to one of the models I can run. Each line (in a selection of different colours) is one of the two hundred virtual geese in this flock. As you can see if you let a flock of 200 geese move randomly around a confined area for a time there isn't much space in that area that hasn't had a goose move over it at some point! All this means that social networks within flocks tend to be highly connected. 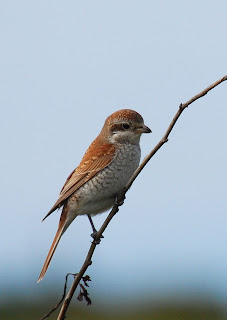 With the autumn in full flow the birding in Cornwall hasn't been too bad either! This red-backed shrike spent nearly a week down on the Lizard peninsula and showed really well at times. I've also managed to track down a Glossy Ibis, Yellow-browed Warbler, black redstart and multiple firecrests in the last couple of weeks, as well as that Cormorant....

Posted by Matthew Silk at 17:59 No comments:

As more and more brents begin to appear in Dublin its beginning to get frustrating being stuck in an office in Cornwall still. There was even a single light-bellied brent (almost certainly from "our" population) just down the road in Falmouth the other day but it didn't seem to stick around for long unfortunately...

I'm still working with virtual geese, hoping to learn a few things about social interactions and social networks that will contribute to us being able to understand and analyse all of the data that 3 winters of fieldwork will provide. A fortnight ago I wrote about a virtual population of geese, and how we could sample flocks from this and look at social networks in a similar way we would in the field, using social groups as a proxy for "interactions". We have used simulations of this population to answer the first of the two main questions we hoped to use them for, and are now busy adapting the code we used so we are in a position to answer the second of the two.

In the meantime I have focussed more on what happens in a single group social group of geese. When we construct a social network for the whole population we tend to assume that all individuals in a group interact (the Gambit of the Group assumption). However, this seems unlikely to be the case as a goose can only "interact" with geese immediately around it. By looking at how movement of geese within groups influences how many other geese in the flock they interact with we can see how accurate this Gambit of the Group assumption is.

Our simulations create a flock of geese and instructs them to move around randomly within their flock (see the video of a program running below). We vary how much each goose can move and look to see how this effects the properties of the social network for the group.

This is already producing some interesting results, and I hope that as we continue to work on the "rules" that govern the movement of each goose we can begin to really get to grips with what within flock networks of social interactions really look like in brent geese. For one thing, I'm particularly excited to see how adding in dominance hierarchies might effect which individuals are important in forming connections in the network of interactions.

Hopefully more to come from me soon!

Posted by Matthew Silk at 15:06 No comments:

41,000 and growing: totals coming in from surveyed sites last weekend! 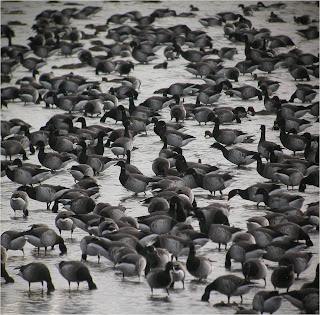 The Excel spreadsheet into which the site totals are being computed is changing hourly. At present the count undertaken by so many of you stands at over 41,800 Brent with the biggest totals predictably coming from Strangford (ca. 23,000), west coast of Iceland (ca. 4,000), Lough Foyle (3,500), Tralee Bay & Castlemaine (3,800) and Dublin (2,000). It was evident that since we brought the date forward and re-organised many of the Strangford birds had dispersed elsewhere and the Icelandic birds had pushed south also. We also have counts from Wales, Jersey, France and many other Irish sites and there will be more! Many thanks to all who participated. Update to follow.
Anyone interested in making a guess at the number of Brent in this picture?....
Posted by KC at 12:18 No comments:

The 15th International Goose Specialist Group annual conference will be held over the period of 8-11 January 2013 at Arcachon, France.